Mission Statement
The mission of the Yakama Nation Museum is to engage the public with culture and art of enduring quality, to facilitate dialog with diverse audiences, and to collect, preserve, and educate audiences for the enrichment of present and future generations

Our History, Our Legacy…Past to Present
The Yakama Nation Cultural Center opened on 9 June 1980, the same year that Mt. St. Helen’s erupted. We are one of the oldest Native American Museums in the United States. The 12,000 square foot exhibition hall is the result of years of hope, thought, and effort on the part of the Yakama people.

Visitor Policies
All group tours must make appointments. Please call our Event Coordinator, Deidre, at (509) 865-2800 x4740 or email us at CHC_booking@yakama.com.

We have listed simple rules for your convenience in advance of your visit.
– No photography
– No food or drink
– No recording devices

Confederated Tribes and Bands of the Yakama Nation

Since time immemorial, the lands of Our People extended in all directions along the Cascade Mountain Range to the Columbia River and beyond. We consider it land given in trust by the Creator to us and a heritage to be held and protected for unborn generations.

The ancestors of today’s Yakamas were of different tribes and bands. Each was a distinct group led by a council of leaders, and each tribe or band spoke their own native language or dialect, and were closely related to other Columbia Basin Plateau Tribes. The following are the names of the tribes and bands that participated in or were named as part of the YAKAMA NATION.

Of the original 10.8 million acres of Yakama lands; 1.3 millions acres were set aside by the Treaty of 1855 as the Yakama Reservation. All of the remaining land was “ceded” to the United States Government for rights, privileges and guarantees to the Yakama people. Today the Yakama tribal members still exercise their rights to “the ceded area.”

In recognition of the original 14 Treaty Signers and officially established in 1944, a tribal council of 14 leaders is elected by the Yakama people and authorized to transact business for the Yakama Nation. This group is called the Tribal Council. A second group of three leaders who provide oversite, monitoring, and follow-up to Tribal Council is called General Council. Both the Tribal Council and the General Council are elected by enrolled tribal members over 18 years of age. A system of utilizing the traditional form of voting by raising of the right hand during election is still practiced today. By this process, the Yakama Nation is recognized as a sovereign traditional treaty tribe.

The first formal Yakama Indian Agency was established in 1859. “After hostilities with the United States military subsided”, the chosen location was the abandoned military base, Fort Simcoe, southwest of present day White Swan. This area, originally known as “Mool-mool”, had been a camp site for the summer and early fall seasons at the time when people did their hunting, root gathering, fishing and huckleberry picking. This seasonal food area on the Eel Trail was the hub of travel to the usual and accustomed fishing, hunting and gathering areas towards the Columbia River. Troops occupying the fort renamed the area “Simcoe Valley.” The name is derived from the Yakama word “Sim Quwe” pronounced “Sim Ku We”, which means “saddle back” or a dip between two hills like a saddle back. The Yakama people called the area Mool Mool because of the spot where the water bubbles out of the ground, making a sound similar to “Mool Mool.” The agency was thereafter moved approximately 30 miles east to present day Toppenish.

NOTE: Resolution T-053-94 has recognized the new spelling of the word “YAKAMA.” “Whereas, for many years the symbolic spelling of our nation has been ‘YAKIMA’ with all of our documents, resolutions, letterheads, and nation’s flag, etc.”, and “whereas, in accordance with our Treaty negotiations, the confederacy of the 14 original tribes and bands shall be know as Confederated Tribes and Band of the Yakama Indian Nation.”

information is Courtesy of the Yakama Nation Museum

Big Research Requests
Research requests must be in writing on formal letterhead stationary from your institution of higher learning or business. The letter must include the following:

Small Research Requests
Please call or e-mail us a month before due date. Base fee is $10.00 and each additional hour is another $10.00.
We are digitizing our collection so research will deepen, broaden and sharpen knowledge of past tribal life.

Museum Processing Time
Your Request Letter will be under consideration by the Yakama Nation Museum staff.
The museums processing time is approximately one month, then a letter of approval or rejection will be sent to you.

Click here to see the Price Guide regarding research.

The Yakama Nation Museum’s Collection Office goal is to preserve and secure the items in the collection. They illustrate our great nation and culture, so a lot of time it put into inventorying them. We are looking to keep these piece for generations to come.

The great dioramas and exhibits of the museum tell the story of the Yakama People. We are the only museum of this kind. Through a blend of dramatic visual and listening experiences you will be taken from time immemorial, through the world of our ancestors, and bring you to the present. 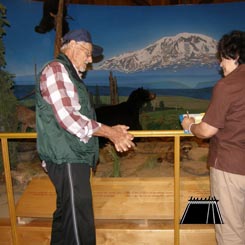 Kamiakin
Head Chief
Original signer of the Treaty of 1855

Owhi
Original signer of the Treaty of 1855

He testified to the Senate Subcommittee on Civil functions in protest of the Dalles Dam which ultimately destroyed Celilo Falls, a prime hub for fishing and trade along the Columbia River. His testimony is attached here.

Nipo Strongheart
Yakama descendant
It was his initial donation that was the catalyst for the development of the Yakama Nation’s Museum and Cultural Heritage Center.